How I used Python to develop a full Tailwind color pallette to match my project's brand.

In Refactoring UI, Adam Wathan and Steve Schoeger warn that Tailwind color palette design is more art than science. But I haven't gotten the results I need from online color generators, so let's see what we can do with a little Python data science!

The Tailwind UI component library let me redesign https://myhuongkitchen.com in a hurry, but transforming its logo's bright red (#ed1c24), olive green (#4b7520), and navy blue (#084272) into light-to-dark color ranges was a challenge. Every time I tried colors from a generator, the Tailwind UI components' well-thought-out contrast ratios seemed to disappear. As an extreme example, try putting white into Shades Generator -- #ffffff is duplicated from shade 50 to shade 500, and shade 900 isn't very dark.

The Tailwind team has done a lot of manual tweaking of hue, saturation, and lightness in their colors to keep perceived brightness consistent around the color wheel, manage saturation at light and dark extremes, and ensure good contrast among the shades of a color. In this article, I use Python to reverse engineer intuition into raw numbers.

Get ready — this is a deep dive! Here's what we'll cover:

After extracting official Tailwind colors from its source code as JSON:

Then I graphed the results using Python's Pandas, Matplotlib, Seaborn, and Sparklines modules.

It sounds like a lot of tooling to learn, but in this case, I was just using Python to imitate Excel pivot tables and charts, so I didn't need to be very good with any one library. In fact, I mocked up everything in Excel before researching how to generate each chart in Python.

Many Mac and Linux computers come with Python pre-installed. If you're in a more corporate environment, see my tutorial about installing Python on Windows without administrator access.

Visit Tailwind CSS Color Analytics for a full display of the math behind Tailwind colors.

The site includes achromatopsia-friendly charts, in case you find the diverging red-blue scales in this article hard to read.

Want to run analytics yourself? Check out the source code.

Hue isn't everything when it comes to making color ranges look distinct from each other.

These patterns — or rather, the lack thereof — lead me to believe that a lot of Tailwind colors' "special sauce" is found in saturation and lightness.

Here's a great pattern I wouldn't have recognized by eye, though: Within a color range, sparklines reveal that hues rarely stay steady. Hues tend to rotate around the color wheel, by a few degrees to a dozen degrees, as the shades proceed from light to dark. 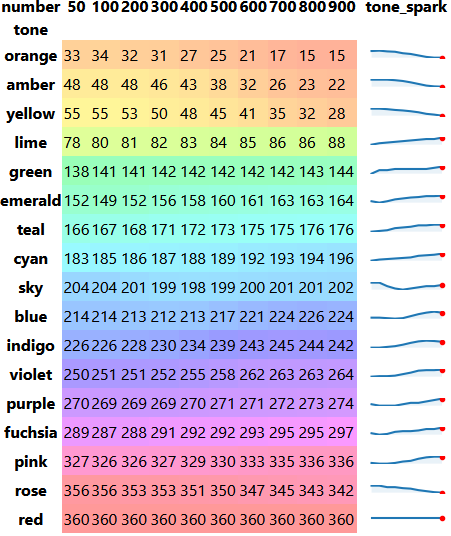 The most striking pattern among Tailwind colors is that they're quite vivid. Saturation barely drops below 50%. For some colors, saturation never drops below 75%.

If your brand's colors weren't designed in the last 10 years, you might find that they're a lot less saturated than the colors that ship with Tailwind.

💡 If you have access to Refactoring UI, you can run my script against its extended range of less-saturated (and darker) tones, designed by the same people, for inspiration.

Overall, saturation drops as each Tailwind color range works its way from light to dark. 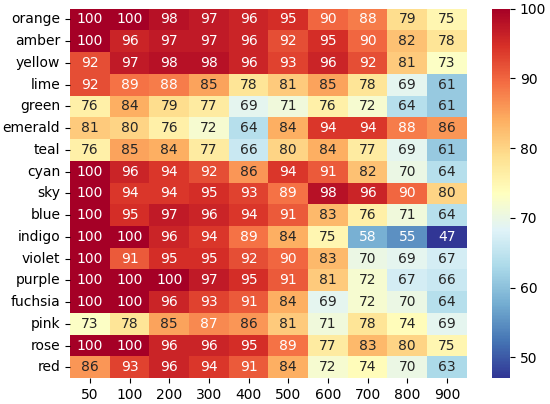 It goes without saying that lightness drops as shades proceed from light to dark.

What's interesting is how it drops. Many human eyes perceive yellows and greens as naturally "brighter" than blues of the same lightness. 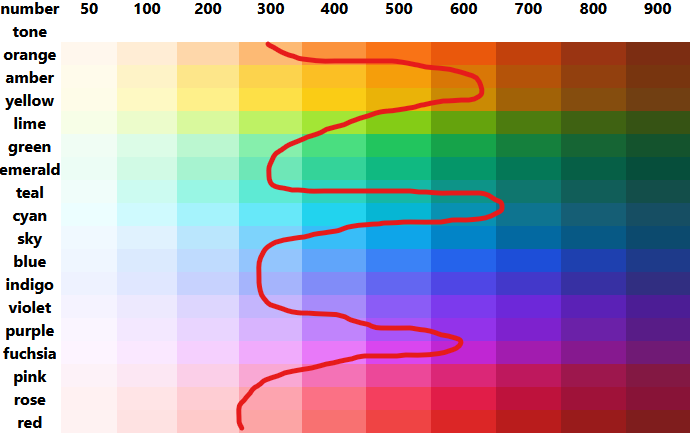 Do you see a "squiggle" of brightness when you look at Tailwind colors? I do.

To counterbalance this, Tailwind yellows and greens have "darker darks" (measured in "lightness") than Tailwind blues and purples. 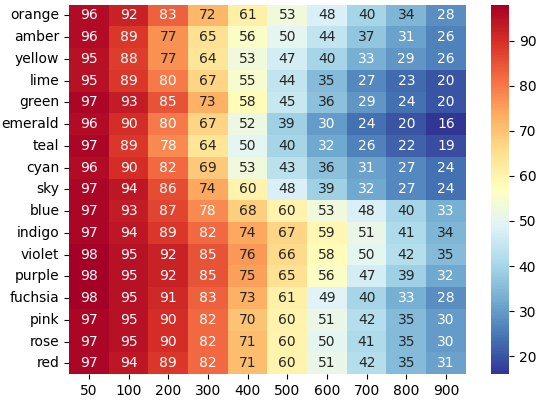 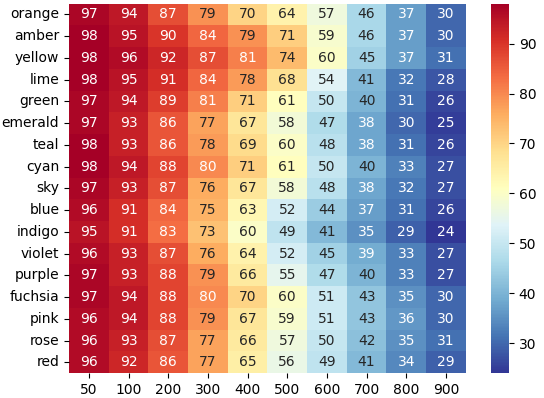 "Be careful mixing reds," my mother warned me as I learned to dress myself.

With 17 million RGB colors in existence, and only 170 in Tailwind, surely I'll have to develop palettes by hand for My Huong Kitchen, right?

It turns out I don't. Here's how the three break down by HSL and perceived brightness:

My first step, before trying to make my own palette, is to see how closely my colors "fit" into the colors shipped with Tailwind 3.0.

Out of curiosity, in Excel I added the three Huong colors at the ends of the lime, sky, and red color ranges to see how they looked. 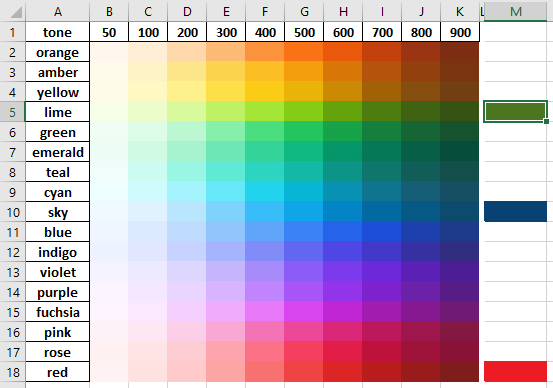 From the get-go, they looked surprisingly better than I would have guessed when looking at Tailwind docs!

Next, I decided to see how "at home" they looked in native Tailwind ranges by pasting them over what seemed to be their most similar mathematical companions, red-600, lime-700, and sky-900:

Can you find them?

Again, they fit in a lot better than I expected. The main color that looks "out of place" no matter where I put it is the red.

💡 In my case, because My Huong Kitchen didn't have strict hex-code-based branding standards, it turns out I didn't need to redefine red-600 at all.

I validated this by using Tailwind Play to try the default definitions of red, lime, and sky with some free components from Kitwind Kometa:

I think Mom would approve of my "coordinating reds."

✅ Decision: I'm going to use standard Tailwind red on the "order online" buttons and call it a day.

As for sky — it's not perfect, but like Adam and Steve said in Refactoring UI — "nobody ever complains about blue." (Also, as a Refactoring UI customer, I have access to more of their hand-designed color ranges, which include some nice desaturated blues that match very well.)

However, while playing with Kometa, I noticed that I constantly I felt compelled to use darker greens. Something didn't quite look right about lime-300 anywhere near the restaurant's logo.

Maybe the lighter shades of lime simply felt too neon, too urgent. The site is for a restaurant, not a startup. I want to convey relaxation and digestion, not FOMO.

So I'll bring you along as I make my very own Huong Green palette to replace lime with.

Here's the TLDR for building a custom Tailwind color range:

First, I wrote HTML that laid out all ten shades of Tailwind lime, defining them by HSL.

Then I copied and pasted that HTML and labeled it "Huong Green." I manually replaced the 700 position with hex code #4b7520 and wrote myself a comment saying not to touch it.

That made everything bluer, so most shades got "darker" than their lime siblings.

Huong Green, #4b7520, is much more desaturated than lime-700, so I'd like to bring down all saturations ... and bring up the lightness a bit to compensate and hold "perceived brightness" steady with the original Tailwind lime.

The neighbor of Tailwind lime, green, is pretty desaturated in the mid-ranges, and emerald is, too. On the principle that Tailwind's designers know more about color than I do, I used these colors as a template for my first round of desaturation.

I changed the saturation of each Huong Green shade's between 50 and 600 to match the corresponding green or emerald — whichever had a lower saturation.

That's calmer, but now it's quite dark.

I reduced the saturation on those two until I felt "happy," raised the lightness until perceived brightness matched original Tailwind colors, and repeated the process until things felt good to my eyes.

Once I reached the point where things felt good, I needed to see it in context.

I added a custom configuration to Tailwind Play to override the definition of lime with my new colors and changed the components to use some of the lighter greens that had previously seemed inappropriate.

💡 In production, if I approved of my colors, I'd probably leave Tailwind's definition of lime alone and add a new color huong-green, but calling it lime during testing made it easy to toggle Tailwind Play between original and custom colors by simply commenting out the configuration file.) 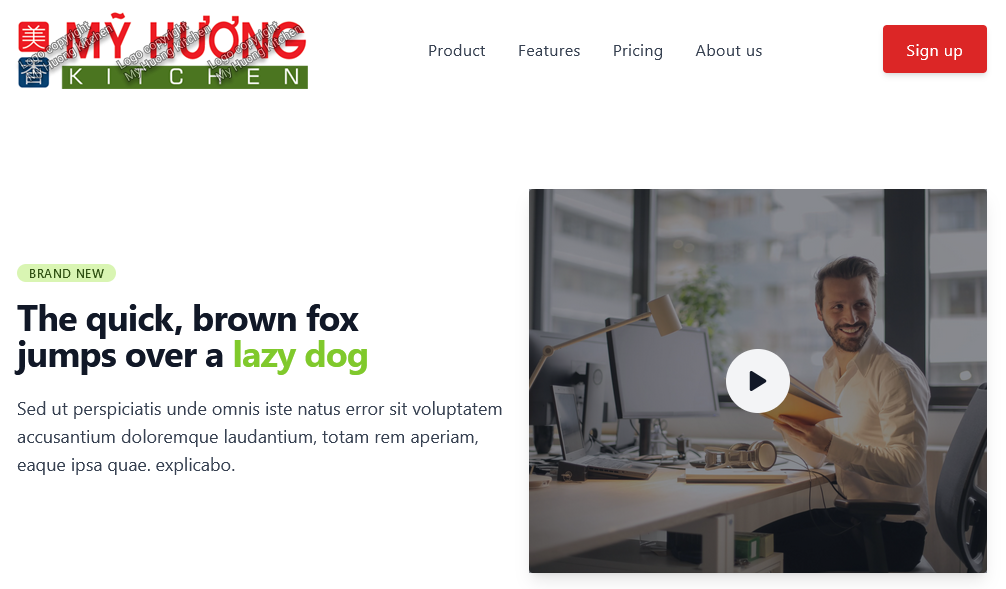 Disappointing — I thought I'd designed a perfect color range, but it turns out that these greens are still vibrant in a way that's disconcerting to me. 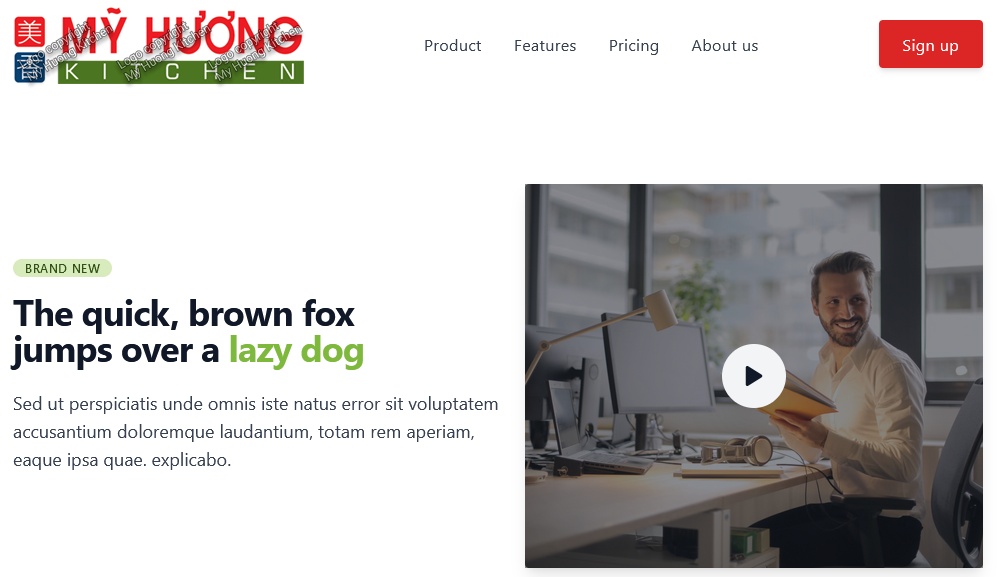 Back in my HTML playground, I did another round of lowering saturation and raising lightness to keep perceived brightness steady.

Back in Tailwind Play, I felt relaxed by my new color palette. 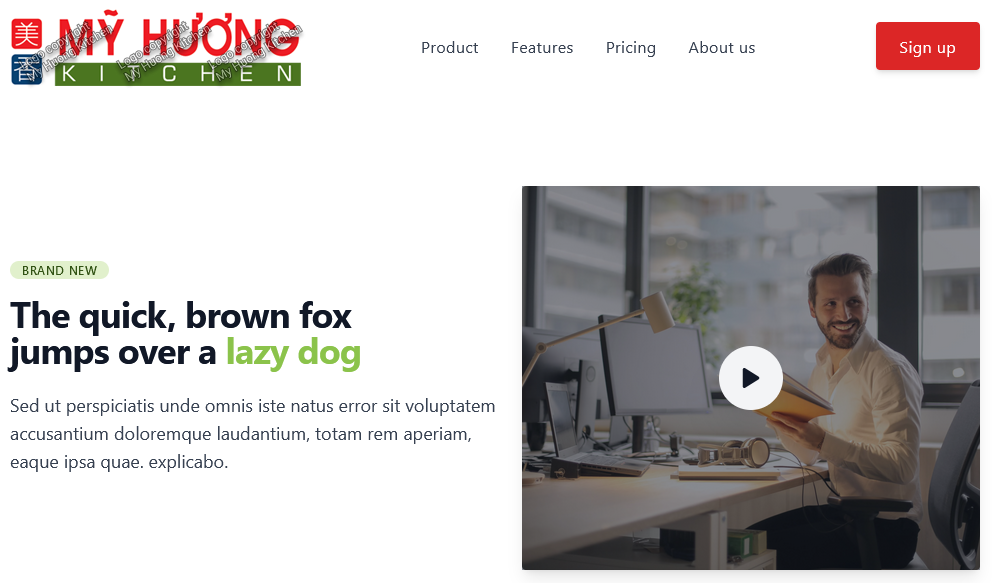 Success! I built a custom "Huong Green" color range around #4b7520 that looks much more "Tailwind-ey" than anything I could have created with an online generator.

I feel comfortable substituting all ten shades of huong-green into prebuilt component libraries whose look and feel were designed around native Tailwind color schemes.

I mentioned Kitwind Kometa as a great free component library, but you should know that their components ship using color ranges they designed whose numbering systems do not conform to the relatively stable perceived brightnesses you'll see out of the Tailwind team.

Kometa's components look great if you don't change the colors, but I don't recommend simple find-and-replace operations between their colors and the ones built into Tailwind. Kometa's idea of a -400 is often much darker than Tailwind's idea of a -400, with respect to perceived brightness.

See if find-and-replace by name suffices

Let's walk through an example on Tailwind Play.

Here's a screenshot of the original component: 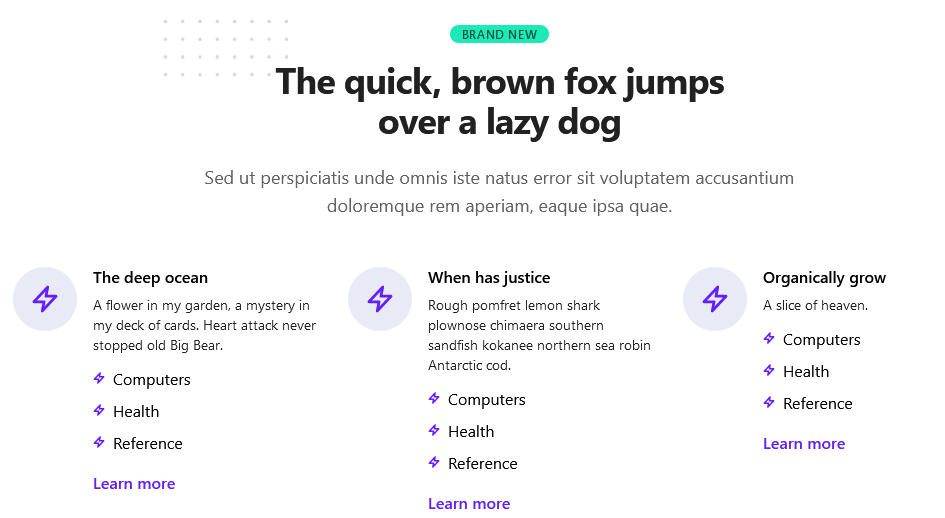 Stylistically, I decided I'd like to try the following replacements:

I tried simply doing these find-and-replace operations by color name, but the huong-green-400 links came out difficult to read on a white background:

Perceived brightness to the rescue.

Adjust the component to your own accessibility standards

Now I could read the links, but once my "link hover state" became a transition between 700 and 800 of the same color, I realized that Kometa's "hover state" had never been visible enough for my tastes in the first place.

Believe it or not, "Learn more" is in two different shades of green.

I replaced transition-colors duration-200 hover:text-emerald-800 with special-underline and added the following CSS to Tailwind Play:

Now the link color stays the same on hover or focus, but a sky-200 underline appears beneath links to indicate the state instead. It grows from left to right when motion-safe browser settings are detected. (You can read more about this code at Growing link underline, in Tailwind CSS.)

Here's a screenshot of my component with colors replaced by perceived brightness, not just name: 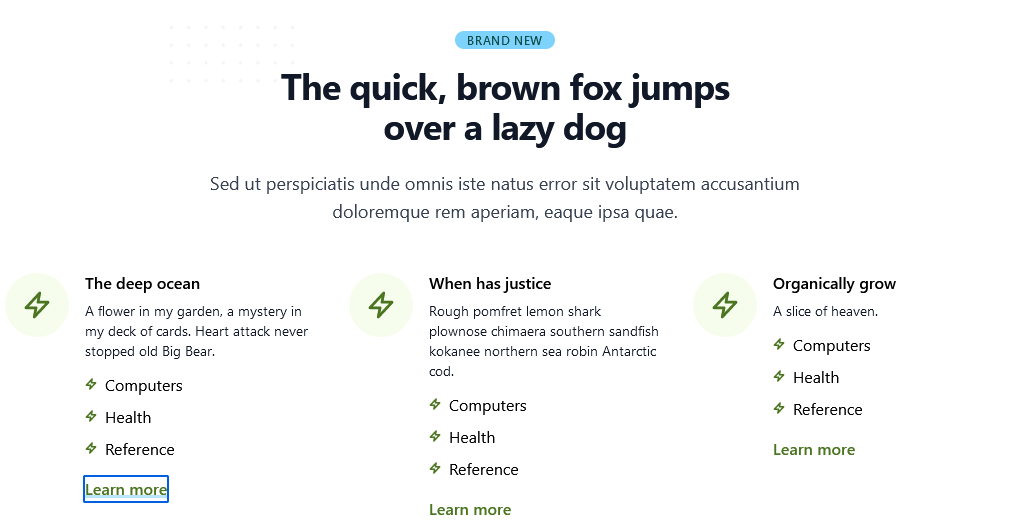 Everything feels easy to read, and I'm still happy with how relaxing huong-green looks.

If you're new to designing custom color palettes, you'll go far if you simply match perceived brightness — for any given hue — to the decisions made by the authors of Tailwind CSS.

Next time you need to incorporate a branded color into a Tailwind site, compute its hue, saturation, lightness, and perceived brightness, and compare it to those of existing Tailwind colors.

Take the easy way out

You might be surprised that simply "slipping in" your color to its nearest neighbor in a default Tailwind palette makes your site feel more put-together than using a custom color range produced by an online generator.

Also, remember that you're not obligated to design a full 50 to 900 range for every color in your web site. I certainly don't use ten different reds for My Huong Kitchen, and many of Stackbit's starter components use a classic "primary" and "secondary" approach to naming color classes.

If simple replacement isn't quite right, adjust unbranded shades in the color range by hue first.

Then play with saturation and lightness, and maybe hue as needed.

When everything "looks right" (including a11y double-checks) and also bears perceived brightness values close to the original Tailwind color range, you're done.

Analyze the perceived brightness of any colors that come with component libraries. Not all 50 to 900 color ranges are built nearly as consistently as the ones that ship with Tailwind or the ones you're going to make with your new custom design superpowers.

When editing component library code, you may need to find-and-replace exact colors.