🎉 Stackbit Agency Partner Program is live. Learn more.
There’s no doubt that collaboration between design, development, and marketing leads to the best and most productive results when building for the web. But it’s really difficult to achieve.

Developers, designers, marketers, and other business teams can accomplish great things when they work together. But collaboration is hard.

To solve collaboration, many teams first work to improve their communication. While that will help, it won’t leave all teams feeling optimized. It is in creating and maintaining specific processes and tools that collaboration can be optimized, leading to fast iterative project cycles (minimal time to market), without sacrificing quality.

Typically, the primary unit responsible for ideating, creating, and enhancing a web experience are design, development, and marketing.

To combine these units into an optimized web team — where both the system and each unit operate with maximum productivity — requires the following:

The Gap in Today’s Market

The optimal web team sounds great in theory, but it’s elusive in practice.

Stackbit’s visual editor is architected to solve collaboration between developers and marketers by allowing developers to focus on creating components the way they like with no restrictions, while marketers can use those components to build and edit websites independently.

Addressing the Gap between Design + Development

But that still leaves a gap between design and development teams. Typically, designers use tools such as Figma or Sketch to design components, then pass their designs to developers who convert them into code.

The problem is that if the design needs to be updated, the process repeats itself. Thus, there are always two sources of truth — the original design in the design application, and the component’s code in the web project. The way to achieve optimal productivity is to work toward a single source of truth. 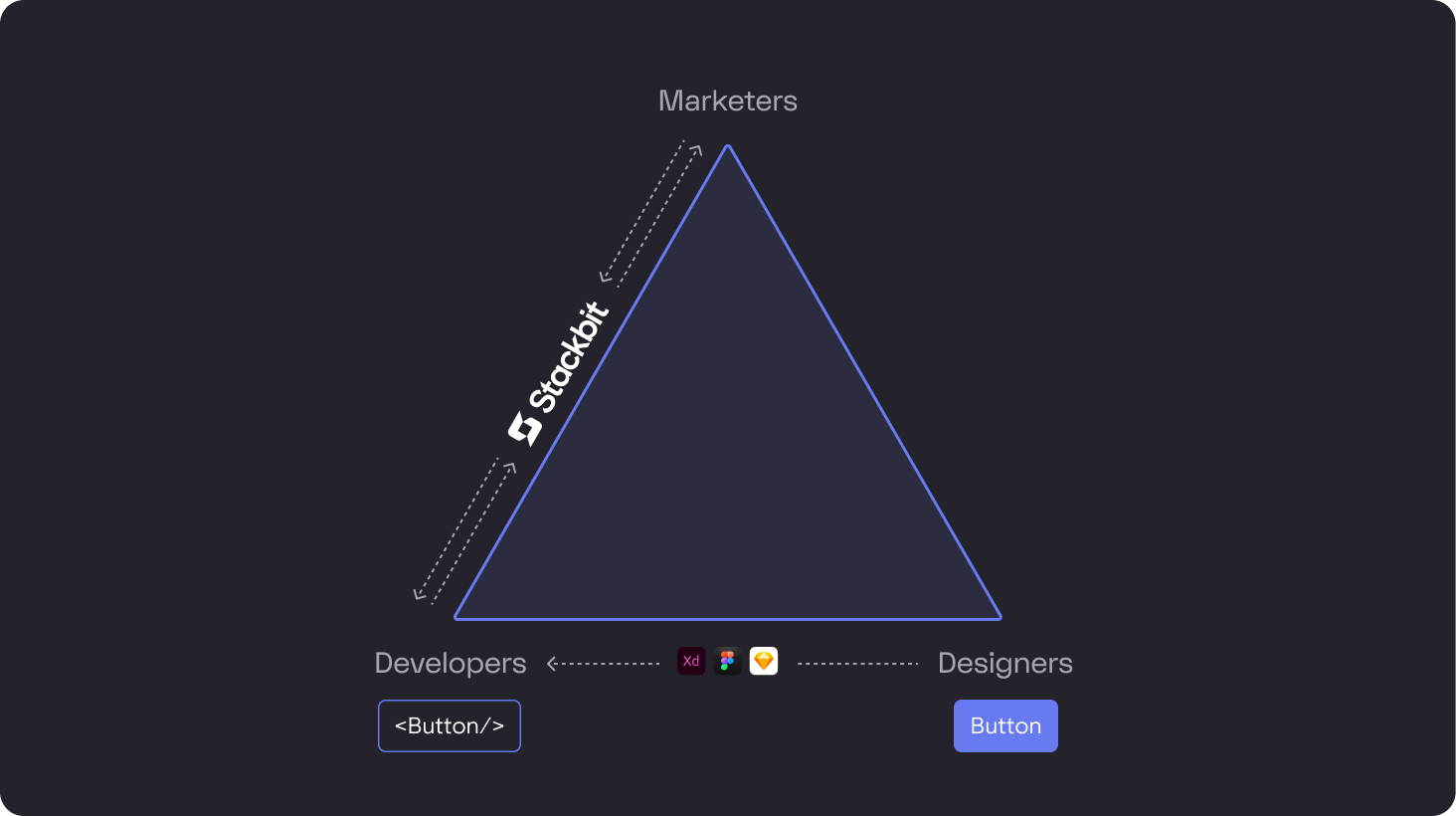 There are two approaches common among teams today for solving collaboration between design and development:

Components with Two Sources of Truth

The most common approach is that the handoff works exactly as mentioned above — designers use their tool(s) to create a design, then hand it off to developers, who implement the design with code.

The benefit of this approach is that both teams have full control over their part of the process. Designers get to use their preferred tooling and processes, and developers can follow their preferences to optimize the code quality.

But, designs are fluid. They change during implementation. They evolve in future iterations. If developers adjust the functionality of a component, that may mean extra work for designers to update designs that have already been implemented. Or, when a change is prompted by design, developers have to keep their code up to date.

There are two types of component code generators:

Component-building tools are getting closer to creating a place for designers and developers to collaborate throughout the life of a website. On the other hand, code-generating tools tend to sound great in theory, but rarely work for long in practice.

This is because these tools are designed for designers. While they may generate code, they take little consideration into the complexity and fluidity required in the development phase of a project, making the process feel more like a cool toy, rather than something that can solve production-level collaboration.

There are a number of reasons why code-generating design applications don’t work in practice. Here are four specific examples.

Some of these code generator tools are vector-based (or plugins for vector-based tools). In these tools, shapes have no semantic meaning on the web.

Consider a checkbox. A designer is likely to build a checkbox as a square, with an SVG checkmark for the checked state.

When the generator converts this element to code, it remains a square — often represented by a generic HTML element like a <div>, and a checkbox represented by an <svg> or an <img> element. Practically, this should be exported as a <input type=”checkbox”> element. 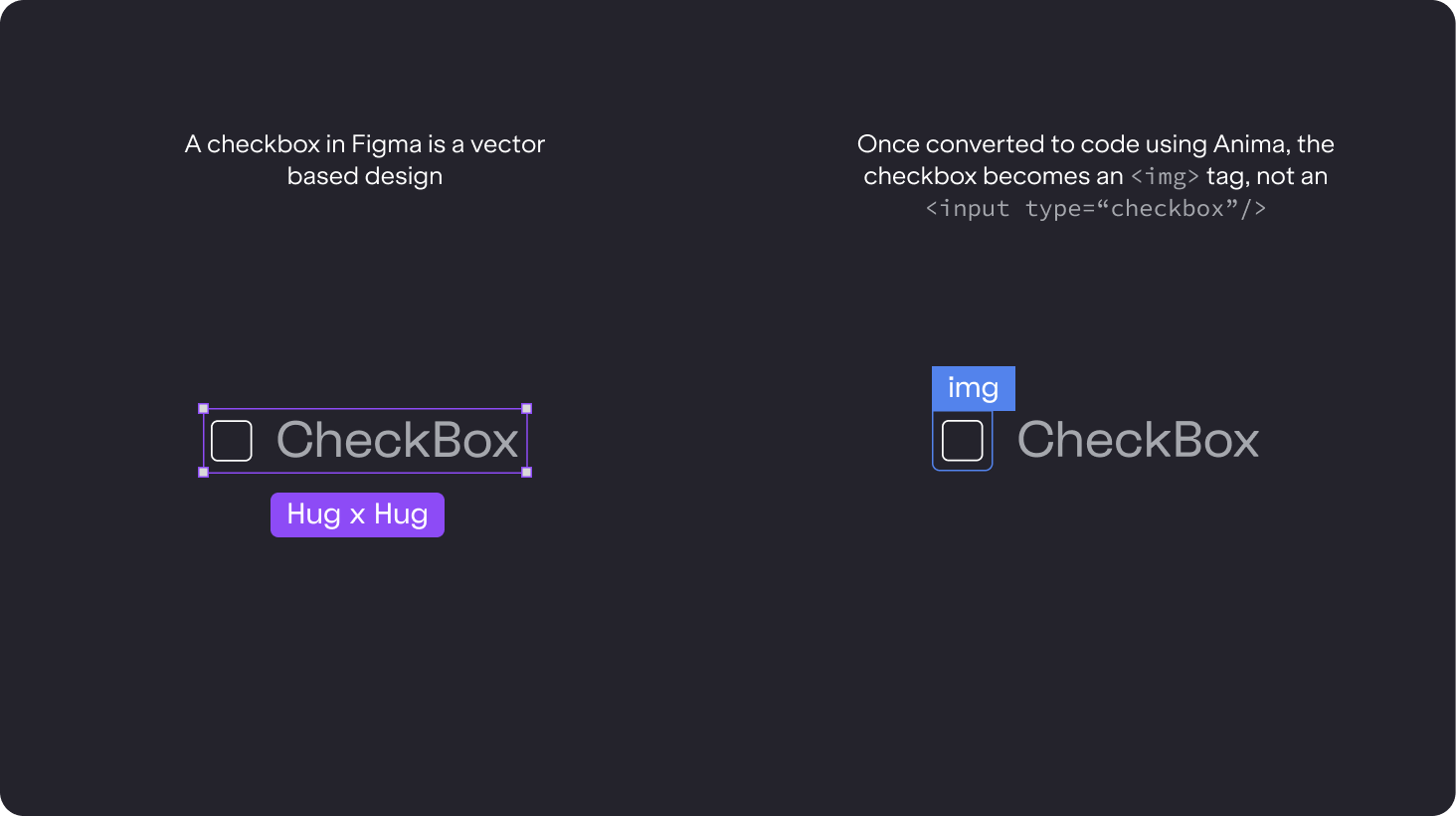 Code conventions and preferences differ from company to company and developer to developer. Often, a developer who sees a code style they don’t like either ignores it (back to two sources of truth) or rewrites it (a tedious process).

For example, there are many different patterns when it comes to defining styles for a component — plain CSS, conventions like BEM or OOCSS, pre-processor like Sass, JS-in-CSS libraries like Styled Components, or CSS modules.

And that’s just handling the styling. There is still the actual code to consider, which brings to mind much wider choices — functional vs class components, code conventions and patterns, shared utilities, third-party tools, etc.

Some tools — like Anima + Figma — allow developers to choose how to generate components. But the choices are still very limited and opinionated, and unlikely to adhere to the developer's preferred conventions. 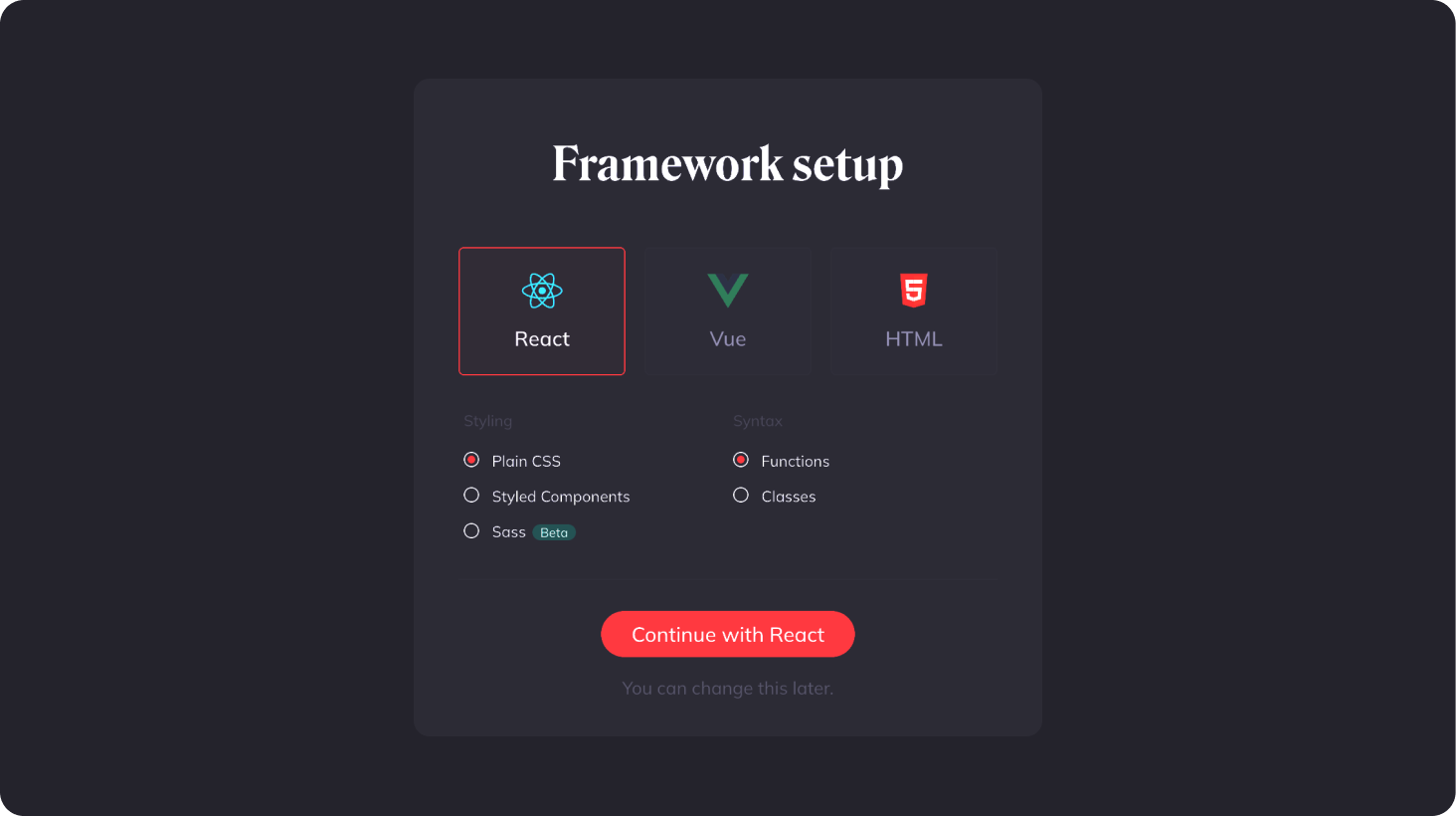 It is impractical to think that a design code generator could ever produce production-ready code. Developers are still going to have to write some code. This could include:

If the designer decides to adjust the original design even slightly, the newly generated code will be missing all the developer-added pieces and will have to be manually merged with the code that was already adjusted by the developer. This is a tedious process at best, or, at worst, may require rewriting the added code.

It’s not just business logic and animation that needs to be added to components. Components are generally built to display dynamic and reusable content. Developers need to extract hardcoded values like titles, labels, paragraphs, images, and other content-based items and expose them as props to be consumed from the content source(s) (API, headless CMS, database, etc.).

All this work must be done every time the component design changes and new code is generated.

2 Ways to Maintain a Single Source of Truth for Components

As we explored above, knowing and satisfying all conditions and preferences is nearly impossible for an automated tool (component code generator) to accomplish.

However, a design tool could create low-level, static, and semantic components in a separate library that developers import into their production site code. Being that it is a separate and external library, if its convention differs somewhat from the developer’s preference, it’s okay.

It’s more important that this automated component code has all the dynamic values exposed as props. Even if some of these components will need to be extended and adjusted, that process becomes more efficient by keeping these components static and simple.

Here’s an example of how it would work in practice.

Alternatively, instead of requiring the design tool to generate code, developers could create a highly-customizable atomic and molecule component system.

These components would surface style properties that would allow designers to manipulate the component into the look and feel needed for some specific context. Using a visual editor like Stackbit, designers could then “lock” these component variations into reusable presets that could then be used by content editors (marketers).

This approach provides a great starting place for teams to work, as it allows developers to focus their changes on a very limited set of atomic components that can be used as building blocks by the rest of the team.

The tradeoff is that designers would have to use two different tools. The process would look like this:

Closing the Gap on Collaboration

The power of Stackbit isn’t just in creating collaboration between developers and marketers. The design-to-development handoff is equally as important when building experiences for the web.

With a little process adjustment, Stackbit can be used to bring these design, development, and marketing more in sync, effectively reducing the time to market for each project cycle, while reducing the dependency each team has on one another.

Get more info and advice!

Our solution engineers and architects can share more reference architectures and advise you specifically on any problem.