Sending data from a JAMstack application may take some work, but is usually fairly straightforward. Calling an API or serverless function just takes a little bit of standard JavaScript. But what about receiving data? When the application source is static, how does an API talk to our app?

There are a number of ways to achieve this, but, in this tutorial, we'll look at a solution that uses a combination of tools including Webhooks by Zapier, Netlify Functions and the GitHub API. These tools will allow us to receive data from an external source, add the necessary details to our site's source and automatically rebuild the site with the new details.

Check out Part 1 of this series that covered sending data from your application using a Zapier Webhook and Netlify Functions.

Note webhooks by Zapier are currently a premium feature.

The sample code from this post is available at https://github.com/remotesynth/webhooks.

Setting Up the Netlify Function

The sample we'll build will use Zapier to watch a list of RSS feeds for changes and then notify a Netlify function that will add the new post title and URL to a data file containing an array of posts. This will then cause the site to update and rebuild.

Let's start by creating the Netlify function. This will allow us to test and establish the API that our Zapier webhook will need to talk to before setting up Zapier. The reason for doing this first is that having an endpoint URL to test the webhook in Zapier against will simplify the process of configuring everything.

To start, create a folder to place our Netlify functions (I named mine lambda but you can name it anything). Next, create a netlify.toml configuration file at the root of the site and add the following configuration to tell Netlify where to find our functions (i.e. the lambda folder we created earlier).

Next create a file named zapierReceive.js inside the lambda folder. This will be contain the code for our function.

Before I continue, I will share a quick story because it helps to illustrate the mental shift you often need to make when working with the JAMstack and serverless. Initially, I figured this example would be quite simple - I'd just load a local JSON file, use the file system API to update it and - whamo! - success!

Some of you may be like, "Wait, that'd never work!" And you'd be right. The first problem is that the function, which exists in AWS, would not have access to the file system on Netlify. Second, in a "real world" situation, your data would likely be loaded and used within various templates that are pre-rendered as part of the static site generator's build process. This means that, even if I had access to the filesystem on Netlify, any change would get overwritten from a rebuild triggered by my git repository.

So, what we really would want would be to write the changes into the git repository (mine is on GitHub) and this change would then automatically trigger Netlify to rebuild the site which would use my updated data file.

Now that I better understood what I wanted to build, I had to find a way to get my Netlify function to talk to GitHub. Thankfully, GitHub has a toolkit called Octokit with a REST implementation using JavaScript that I could plug into my Node-based function. The documentation may seem overwhelming as the API can do so many things, but using the search I was fairly quickly able to find the methods I needed. To install it, use npm install @octokit/rest --savedev.

The first step is to go into the developer settings in your GitHub profile and create an access token that we can use to authenticate with the API since we'll be wanting write access to the repo. You'll want to give the token access to write and read packages.

Copy the token and head to the Netlify admin for this site (you'll need to set the site up if you don't have an existing one). Go to Settings > Build & Deploy > Environment. Create a new environment variable containing the token so that we can access it from our function code without exposing it publicly.

Now let's look at the contents of zapierReceive.js. There's a lot going on, but I'll explain it as best I can.

The first few lines import Octokit and set variables for the username and repository that I'll be connecting to. We begin the function by instantiating Octokit using the Netlify environment variable we set up earlier for auth. Next we do some very basic validation to ensure that a title and URL have been sent. After that, we use Octokit to call the GitHub API and get the existing contents of the file we intend to change, which is returned as Base64 (perhaps there's another method for this that doesn't return Base64, but this worked fine for my purposes). When that succeeds, we add the new item to the array, convert it back to JSON and then use Octokit to write the contents back to GitHub with a commit message.

Phew! 😫 Honestly, it was far easier to write than it is to explain.

Assuming you are running Netlify Dev using the default settings, the URL to test the function should be localhost:8888/.netlify/functions/zapierReceive. Go ahead and plug that into Postman, along with the JSON payload to ensure everything is running properly. 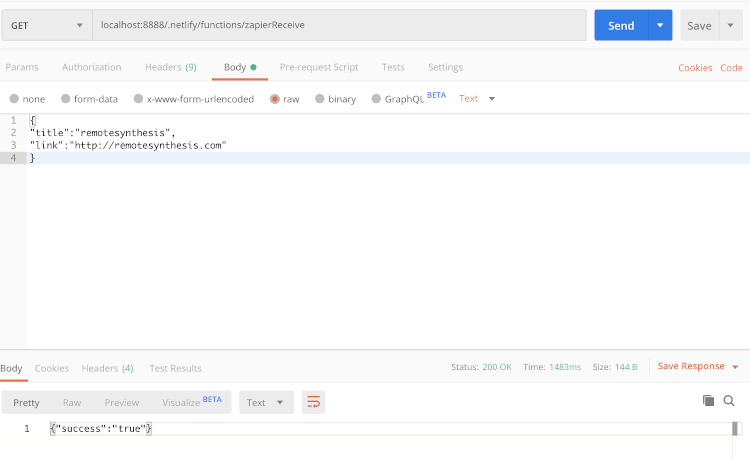 If you get back success, then we're good to move on to the next step. It's worth noting that even though we called this locally, it is making a change to your GitHub which repository would be reflected on your site.

You probably already deployed the function to test it, but there is one problem you may encounter. We're using Octokit but it isn't installed on our instance running the function. So if you called your public URL via Postman right now, you should get an error. There are multiple solutions to this.

Once we've deployed our function with the necessary dependencies, we should be able to call our function on Netlify from within Postman using a URL structure like [My Netlify URL]/.netlify/functions/zapierReceive. This should update your list of URLs and cause the site to rebuild with the new URL added.

Setting Up the Webhook in Zapier

Now that we have an endpoint to post to (i.e. our Netlify Function), we can set the rest of the process up in Zapier. Start by making a new zap and search for "RSS by Zapier" and then choose "New Items in Multiple Feeds". This task will watch a list of RSS feeds and run when it sees new posts. 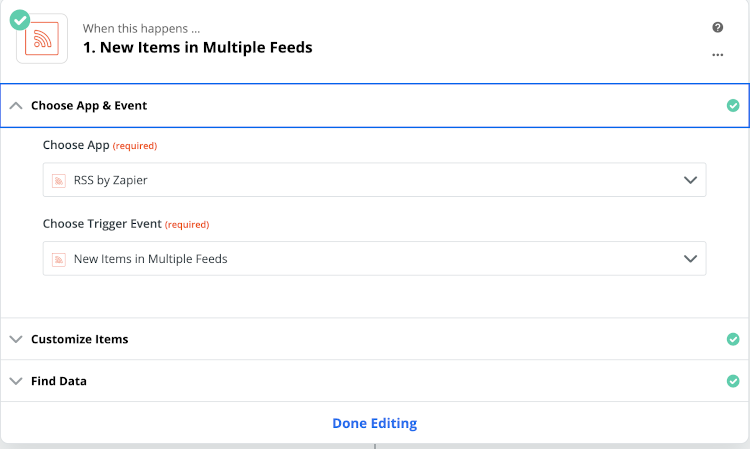 Next, we'll choose our feeds. I chose a couple of my favorite developer-focused sites. 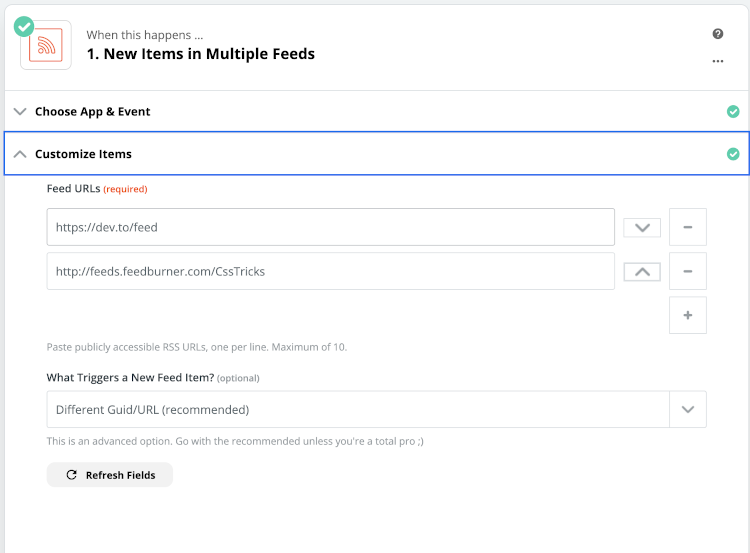 Once you've set the feeds you want, the next step is to map the RSS data to the fields you want to send to the webhook. In our case, we just need title and link parameters. 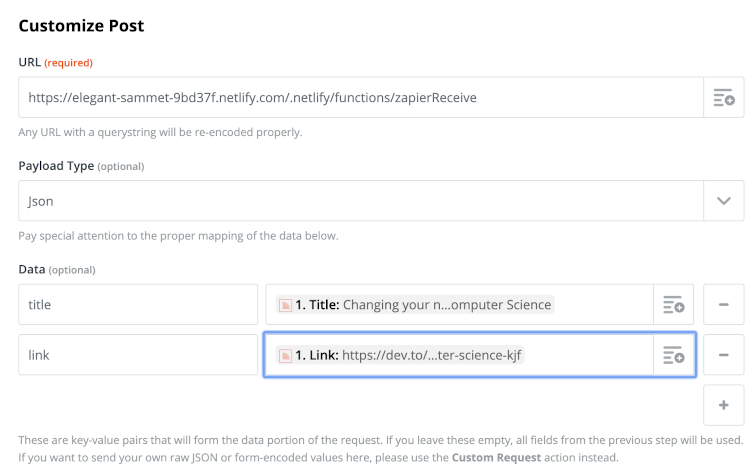 Once this step is complete, you can click "Test & Continue" to move on to configuring the webhook.

For the "Do this..." portion of the setup, we need to search for and choose the "Webhooks by Zapier" task. Once that is chosen, select "POST" as the "action event" option. This specifies the method by which data will be sent to our endpoint.

Clicking continue will allow you to test and ultimately save your configuration. Assuming the function returns success, you can enable our zap. Once the zap is running, you should eventually see links added to the JSON on your site and reflected on the site itself if you have that data mapped to a layout. For example, here's mine (beautifully designed) after leaving the zap running for a while. 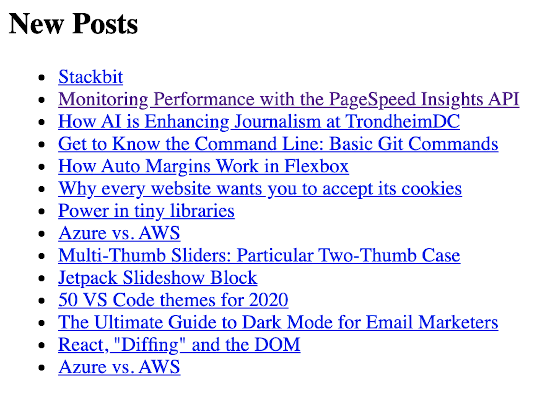 Obviously, this is a very basic example of what you might do using these tools. There are 1,500+ apps that Zapier integrates with, so that's an enormous amount of sources you can integrate with to pull data into your site. For example, you could automatically pull in new images posted to Instagram and push those images to a gallery on your site. Or you could pull in data from a Google Sheet making it easy for an editor to update a list of data that appears on the site. These are just a couple of ideas and, while using Zapier isn't necessarily required to accomplish any of these, it does simplify the process and help you avoid digging into the ins and outs of each specific API.

If you'd like to check the sample code for this and the prior tutorial, it can be found at https://github.com/remotesynth/webhooks A step-by-step tutorial showing how to automatically update your JAMstack site with data connected to over 1500 services via Zapier webhooks and Netlify Functions.